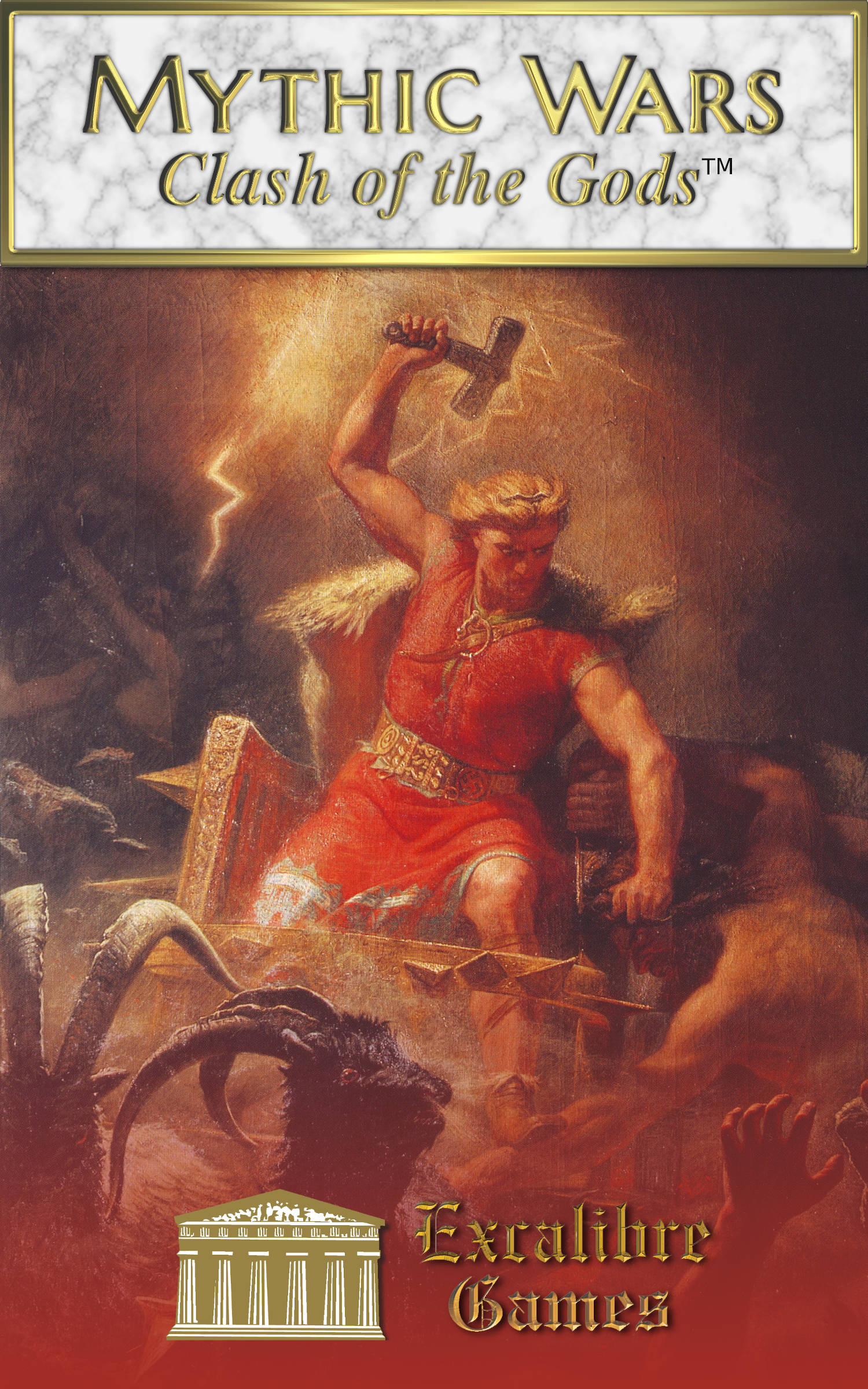 Somewhere at the edge the universe, the gods gather for battle…

The old divisions of the pantheons have been shattered, and new factions are forming. Soon, the gods and goddesses will wage war amongst each other. But to do so, they will need advocates: fearless mortals who can empower them to fight. And so the call has gone out across the infinite realms, seeking mortals with the strength and skill to lead their factions to victory.

Are you up to the challenge?

Mythic Wars: Clash of the Gods is a card game designed for 2-8 players, aged 12 to adult. In the game, each player takes on the role of advocate, supporting a faction of four deities (gods and/or goddesses). Each round, the advocate chooses which god or goddess to invoke and bring into the battle, and what attacks (or other actions) the active deities should perform. After each god and goddess in play has been empowered with a chance to perform an action, the round ends. This continues until only one faction remains.

Remember that you can always find the latest version of these rules at MythicWarsGame.com!

In order to play Mythic Wars: Clash of the Gods, each player will need:

If this is anyone’s first time playing Mythic Wars, the easiest thing to do is to shuffle all of the deities together (don’t forget to remove the creatures!), and deal 4 (face down) to each player to be their faction deck.

After everyone has gotten used to the game, the faction decks can be determined a number of different ways:

There are even some advanced versions of the game which add some limitations on the deities that participate in the battle (see Advanced Rules, below).

An entity’s card contains everything a player needs to know about each god, goddess, and creature in the game.

Each god and goddess in Mythic Wars is (or was) associated with a specific culture, as indicated by their Pantheon symbol.

Entity cards can be in one of several different states, and will change states as the game progresses. These states are indicated by the positioning of each entity’s card.

Again, it is important to remember that an entity’s abilities only remain active while that entity’s card is face-up.

Each player should sit with the 4 cards from their faction deck lying face down (uninvoked) in front of them.

Before the game begins, determine which player’s faction will Invoke first. This faction is called the “prime faction” (for the first round).

Example: Two players, Cleo and Erik, are playing. They have each placed their faction decks of four god and/or goddess cards face down in front of them (so they are uninvoked). Erik won the coin toss, so his faction will be the prime faction for the first round.

The game is divided into rounds, with each round lasting until all entities in the battle have been empowered.

A round can have up to four phases:

Example: Two players, Cleo and Erik, are playing. This is the first round, and Erik’s faction is the prime faction, so now that the Empowerment Phase has begun, he gets to empower one of his entities first. The only one he has at the moment is Thor, so he declares that Thor will be empowered to make an attack at Set, and he turns Thor’s card 90 degrees clockwise (to show that it has been empowered).

When an entity makes an attack, the following happens:

Example: Cleo and Erik are still playing. Erik is empowering Thor to make an attack, and he declares the attack will be against Set (since he’s the only opposing entity in play). Erik takes a die and rolls a 4. He adds this number to Thor’s Attack score of 7, for an attack roll of 11. Cleo, likewise, picks up a die and rolls a 3. This is added to Set’s Defense score of 6, for a defense roll of 9. Since Thor’s attack roll is higher than Set’s defense roll, the attack hits, and Erik removes (11 - 9) 2 energy point tokens from Set (who now has 6 energy point tokens left). Now, it’s Cleo’s turn.

Each entity also has an ability. Most are self-explanatory, and can modify an entity’s scores or rolls. If an ability has the 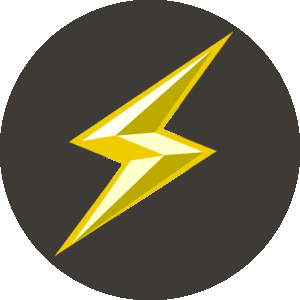 symbol, that ability may be activated by empowering its entity.

There is one main rule to remember when it comes to abilities: If a card has an ability that directly contradicts any rule in this document, the card overrules this document.

Example: Cleo and Erik are still playing. It’s Cleo’s turn, and she has decided to empower Set to use his ability, which allows him to clash with an opposing entity.

Whenever an entity makes an attack, defense, or clash roll, if the die is a natural “6”, that roll is a Critical roll.

When an ability refers to “clashing”, the following happens:

Example: Cleo and Erik are still playing. It’s Cleo’s turn, and she is empowering Set to use his ability to clash with an opposing entity. Cleo declares that Set will be clashing with Thor (the only opposing entity in play), and she rolls a die. The roll is a 3, which she adds to Set’s Power score of 8, for a clash roll of 12. Erik takes a die and rolls a 3, which he then adds to Thor’s Power score of 7, for a clash roll of 10. Set has won the clash, and his ability instructs Cleo to roll a die, and remove that many energy points from Thor. Cleo rolls a 3, so she removes 3 energy point tokens from Thor (who now has 4 energy point tokens left).

If, at any time, an entity’s energy point total drops to 0 or less, that entity is considered defeated, and should immediately be flipped face-down and turned sideways to show that it has been removed from the battle. Abilities on defeated entities do not affect the game anymore, and they cannot be empowered.

Each entity in Mythic Wars has an element symbol, which helps to define their ability.

After each round ends, determine which faction will be the prime faction for the next round:

Also, it is important to remember that some abilities trigger at the start of each round, and these should be resolved (prime faction first, then each other faction clockwise) during the Start of Round phase.

Example: Cleo and Erik are still playing. They each only have one entity in play, and those entities have both been empowered (they’re face-up, but turned on their sides), so the first round is over. Both players reset their empowered entities (turn them back vertical), and Cleo’s faction becomes the new prime faction (Erik’s faction was the prime faction in the first round, and Cleo is the next advocate clockwise from him).

The Start of Round phase begins, but since none of the entities in play have abilities that occur during this phase, it passes uneventfully.

Chalchiuhtlicue’s card says that, when she is invoked, Cleo can use her ability to force an opposing entity to make a Defense roll. Since she was invoked during this Invocation Phase, Cleo declares that she will choose to use Chalchiuhtlicue’s ability on Fujin. Erik picks up a die and rolls a 4, which he adds to Fujin’s Defense score of 6, for a total defense roll of 10. Since Fujin’s defense roll was less than 11, Chalchiuhtlicue’s ability says that he is defeated, so Erik flips him face-down and rotates him 90 degrees clockwise. This ends the Invocation Phase.

When the Empowerment Phase begins, Cleo gets to empower one of her entities first. She chooses Set, declares that she will empower him to use his ability to clash with Thor again, and turns Set’s card 90 degrees clockwise. She takes a die and rolls a 2, which she adds to Set’s Power score of 8 for a clash roll of 10. Erik picks up a die and rolls a 3, which he adds to Thor’s Power score of 7 to also get a clash roll of 10. Since the rolls are tied, both advocates roll again and re-calculate their totals. This time, Cleo rolls a 1 to give Set a clash roll of 9 (8+1), while Erik rolls a 5 to give Thor a clash roll of 12 (7+5). Thor wins the clash, so Set’s ability doesn’t affect him.

Now, it’s Cleo’s turn again, and she only has one unempowered entity left in play, Chalchiuhtlicue. She declares that Chalchiuhtlicue will attack Thor, and turns her card 90 degrees clockwise to show that she has been empowered. Cleo picks up a die and rolls a 5, which she adds to Chalchiuhtlicue’s Attack score of 8 for an attack roll of 13. Erik takes a die and rolls a 6, which he adds to Thor’s Defense score of 7 for a defense roll of 13. Even though these rolls should be tied, Erik rolled a natural 6, meaning that Thor’s defense roll is a critical roll, and the attack misses.

Finally, since no one has any unempowered entities in play, the second round ends, and the third round begins.

The game is considered to be over the moment that the following two conditions are met:

The faction still in the game at that time is the winner.

Once all players are familiar with the rules, other game modes may be played, which change how the starting factions are determined.

I owe a great many thanks to a number of people:

Each card is marked with information about its image, but all images are used under either a Creative Commons or Public Domain license. Further information can be found at MythicWarsGame.com.

The game also makes extensive use of the Liberation Sans, Linux Libertine, and Marcellus fonts, all of which are used under a SIL Open Font License.

Mythic Wars and the Mythic Wars Logo are trademarks of Eric Woodward, and licensed by Excalibre Games.